BBC: ‘Aunt with no kids’: The women redefining family roles

Melanie Notkin, Savvy Auntie and PANKs (Professional Aunts No Kids) are part of this featured story in the BBC's Work Life section. Thursday, December 8, 2021.
'Aunt with no kids': The women redefining family roles
By Anna Jones 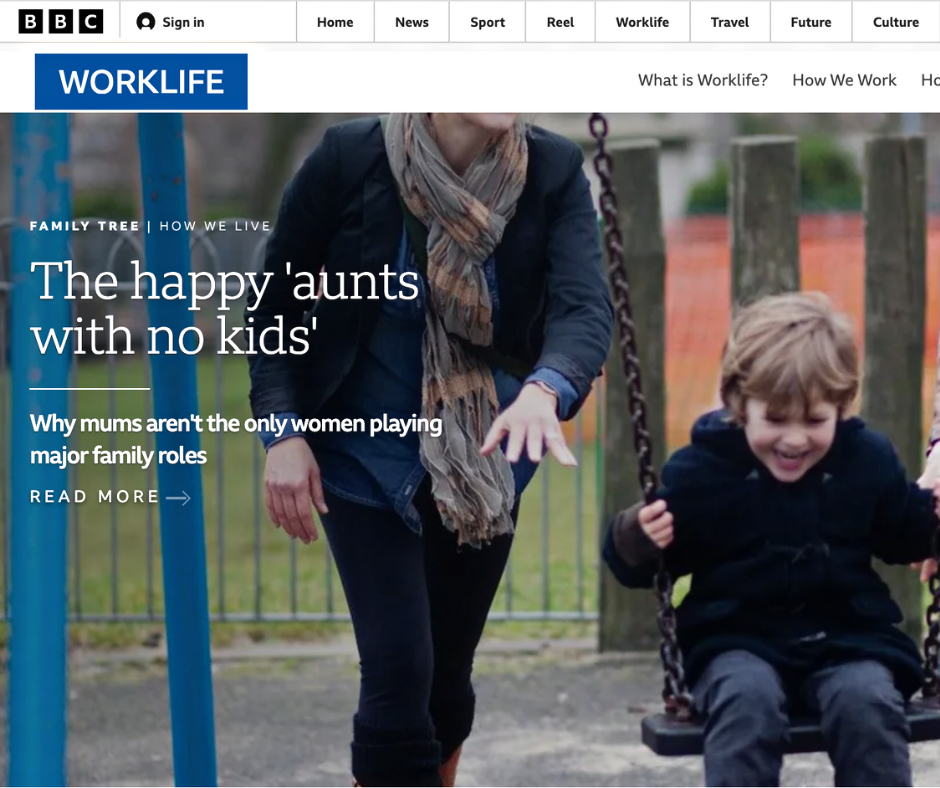 More women without children are actively embracing the role of aunt. Experts say it’s time we recognised aunthood for the rewarding, beneficial or even transgressive role it can be.
....When Lahad and May began researching how contemporary aunts navigate their very nebulous and complicated role in families and society, they found there was very little available data. One good resource, however, was advice letters written to the website Savvy Auntie, which bills itself as “the first community for aunts”. The website is run by New York-based author, marketer and entrepreneur Melanie Notkin, who in 2008 launched a bold attempt to redefine the contemporary aunt.

Notkin, now 52, says as she waited to have children who never arrived, she found that her nephews and nieces had become “the centre of my life”. And it wasn’t just her; increasingly, her female friends weren’t having children. Nevertheless when they all met up, conversation was often dominated by “talking about our nieces and nephews”. She then started looking into how professional women without children were being depicted in advertising and the media. On the rare occasions they were represented, she realised, “it's often in a stereotypical way that’s not necessarily a positive reflection of these women”, citing movie tropes like the cold career woman or the irresponsible party girl. “I felt strongly that it was time that we collectively began to understand this generation of women that are often not even recognised as a cohort,” she says.

As a marketer, Notkin seized on the business potential of this realisation, launching her own rebrand of the aunt role. She came up with the acronym Pank: Professional Aunt No Kids. She felt this described the well-educated, high-earning professional women she knew who, through choice or circumstance, did not see themselves becoming mothers, but nevertheless adored the children of siblings or friends, and were more than ready to share their money and time with them.

Notkin’s early work focused on Panks as consumers; she subsequently turned her Pank concept into a brand, wrote two books and launched her website, with an advice forum for aunts along with gift reviews, news and guides for how to spend “qualauntie time" with children. But what started for her as a commercial move began to take on deeper significance as she realised putting an empowering twist on the aunt-without-children role was deeply affecting for many women. “Did I realise how deep it would go and how sort of self-affirming it would be for so many women? No," she says.

Through the interactions she had on her website, Notkin found that re-branding the disparaging concept of the "childless spinster” as a celebratory Pank enabled women to “recognise the role that they play as having meaning”. She recalls a woman who wrote to her to say she had been struggling with infertility and with deep envy for her sibling, who had a child. "She said, ‘I want you to know that because of your work, I was able to see my role differently. You made me see that I may not have a child now… but I play a valuable maternal role.”

While Notkin's website provided Lahad and May with ample material for their research, they feel the Pank concept is just one part of the puzzle when it comes to creating greater recognition of the emotional, financial and social role aunts play – something that will become more pressing if the trend of more women not having children continues....